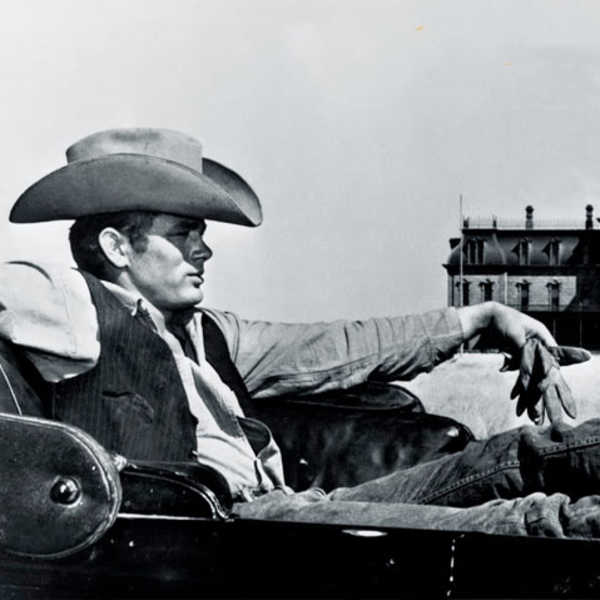 The Astounding Similarities Between Texas and Iran

A few months ago, I was visiting my dear cousins in Toronto, Canada, and we were talking about the many positive traits of the city (they call it Tehran-to due to the enormous Iranian population there by the way). The conversation eventually turned to me, however, and one cousin asked ‘So… do you actually like Texas?” Now, everyone knows that Texans have a inflated egos when it comes to where they live, and most people who don't live in Texas are baffled by this. But, live in Texas for a while (I’ve been here since moving from Tehran when I was 4), and you’re completely swept away by this pride. There’s a saying here ‘I wasn’t born in Texas, but got here as fast as I could’- and this exactly describes me.

I explained this to my cousins and they looked at me in disbelief. “Well what about the politics- George W. Bush?” “Sure, I said, “but think about it- you could say the same thing about Iran. I mean- Ahmadinejad? But politics aside, the people are wonderful- just like in Iran.”

"Ok,” they said, “but aren’t the people all cowboys? Shooting guns, and riding on horses?”

“Hang on…” I said, seeing another parallel. “You’re doing it again- people who don’t know say the same thing about Iran- isn’t it a country full of terrorists that ride on camels? We know that’s absurd- it’s the same with Texas.”

And suddenly it began to dawn on me- no matter where in the world you’re from, you’ve heard of both Texas and Iran, and you have a picture of your head of what that place is like. This picture is probably far from the truth. Add that to the messed up politics, prideful people with an extremely inflated sense of self, a deep sense of culture and a storied past- is Texas the Iran of the west and Iran the Texas of the east?

So, without further ado, here are the ways in which Iran and Texas are exactly the same.

1. Cowboys and horses, terrorists and camels

No matter where in the world you’re from, the idea of ‘Texas’ brings up very specific stereotypes in your mind- usually immediate pictures of cowboys, guns and horses. Those of us from Texas know that while there is some of that around, most of Texas isn’t this way. Same with Iran- people have very specific images that come to mind when thinking of Iran. Unfortunately in recent years, a lot of these images have to do with negative propaganda of Iranians being terrorists on camels- while there are some camels in Iran, people who have been there know that this is far from the truth.

2. Prideful people with extremely inflated senses of self

Both Iranians and Texans are extremely prideful people often to the bafflement of people from other places. Iranians love to talk about their thousands of years of history, accomplishments, culture and arts- if you get them started, they love going on and on about the glory of the Persian empire. Same with Texans- such an inflated ego. Again, to people outside of Texas, they seem absolutely delusional- but live here for a while, and you’re swept away by the rebellious legends and tall tales.

George W. Bush and Mahmoud Ahmadinjead are cut rom the same cloth. Thankfully we have moved on, but for a long time, these crazy politicians ruled the world and caused a lot of damage. Both Iran and Texas are worldwide players when it comes to politics, and often not in a good way. Iran is a major regional power, and often rules the headlines elsewhere in the world. Similarly, Texas politics has an oversized impact on politics in the United States- and Texas politicians often gain the worldwide stage as well (Lyndon B Johnson was another Texan president).

Just a very few short years ago, when people thought of Bush, they’d immediately think of Texas, just as when people thought of Iran, they’d think of the crazy Ahmadinejad. But the truth is, people in most of Iran did not like Ahmadinejad and were embarrassed to be associated with him, just as many people in Texas didn’t want to be associated with crazy Bush and his policies.

Both Iran and Texas are oil rich- and this plays a large part in the culture of both. With oil comes money, power, and prestige- and all the complications that come with such things. My grandfather worked for sherkaté naft, the national oil company in Iran, and there are so many stories associated with the era he worked there. Similarly, so many people in Texas have ties to the oil industry. While both Iran and Texas have both diversified their economies in the past few decades, it's hard to overestimate how much oil plays a role in both.

If you’ve been following us for a while, you’ve seen our tārof video, and how I sometimes compare it to southern hospitality. We may do it a little differently in Iran (a bit more extreme), but Texans are known for their tārof as well. A lot of people who visit are confused by the fact that everyone smiles at you, nods their head hello, and asks how you’re doing.

6. Land of poets and troubadours 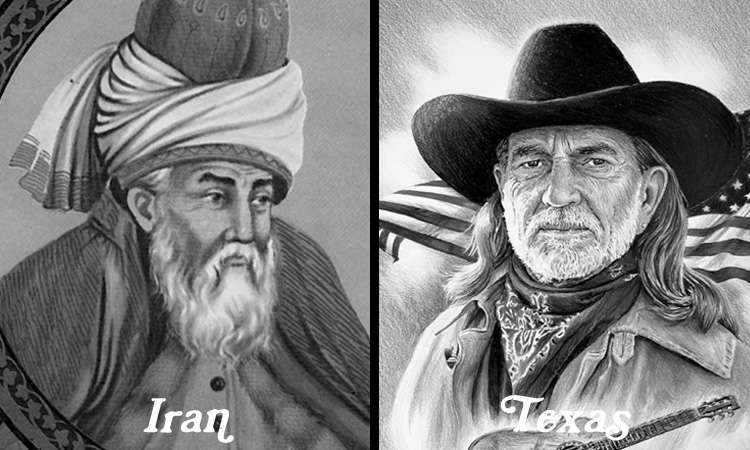 Iran prides itself on some of the most beautiful poetry in history- that of Rumi, Hafez, and Saadi to name a few. Texas also has many poets of his own- Willie Nelson, Townes van Zandt, among other outlaw musicians.

7. Stereotyped as ‘all desert’

8. But with a much more varied landscape

When most people think of Iran or Texas, they immediately think of desert landscapes. But both places are so much more than that- with varied landscapes that change throughout the whole region. Both Iran and Texas go from desert landscapes to snowy northern regions. Due to the size of each, you can find all four climates easily in each. It helps that they are on similar latitudes- in fact, Ahvaz, where my family is from, and Austin, where I currently live, are on the exact same latitude! 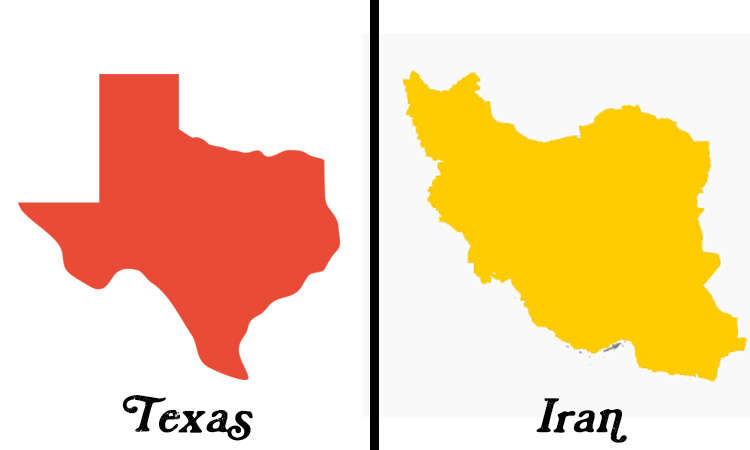 This might seem like a minor point but not all countries or states have such unique and distinctive shapes. When the borders of Texas were being drawn, it is said that Sam Houston, one of the founders of Texas, placed a great emphasis on it becoming a 'most pleasing shape', and many of the decisions were made accordingly. The shape of Iran has changed over the years after so many conquests and wars, but the resulting map is said to be a shape similar to a cat. It is important to note, however, that while Texans may think ‘Everything is bigger in Texas’, Texas is slightly less than half the size of Iran.

The national food of Iran is kabob- grilled meat, and the most popular food of Texas is barbecue- smoked meat. Just as Iran has many roadside kabobis (places that sell amazing delicious kabob), Texas has so many roadside barbecue joints. And really, the two are only slighty different. Kabob is grilled over a fire and served with rice and tomatoes, while barbecue is smoked through the night and sold with potatoes and beans. I love both equally.

12. An obsession with tea

Iranians and Texans are both obsessed with sweet tea, but there's one slight difference- in Iran, we like it hot, hot, hot, while in Texas, we like it iced. But in both places, tea is a staple of the culture and enjoyed widely by everyone.

They might be slighty different versions of 'football', but Iran and Texas are equally as fanatic about their sports- Friday Night Lights and World Cups, they're all the same.

One of my favorite sayings in the Persian language is ‘eenjā Texas neest’, which basically means ‘This is not Texas.’ Iranians use it when they want to point out that life is not a free for all- that there are rules, regulations and laws. Basically, they’re saying they think Texas is crazy. I didn’t know this was a thing, because Iranians in Texas don’t use this expression- because obviously, this actually IS Texas. Similary, people in Texas think that Iran is an absolutely crazy place. Both face so much unfair stereotyping and prejudice from outside. Those of us who know better, however, know how lucky we are. Growing up in the west, I used to go on and on about what an amazing place Iran was- I still do, much to the annoyance of my friends and my husband. But over the years, my Texas pride has grown as well. I feel like this was all some sort of set up.

But it's all right, I wear both my Iran pride and Texas pride on my sleeve (and quite literally have a Texas necklance and Iran necklace hanging around my neck at all times)- and hope to dispel some of the myths, because I forever love Iran, and for the foreseeable future, indeed 'eenjā Texas hast! (This IS Texas!!)". 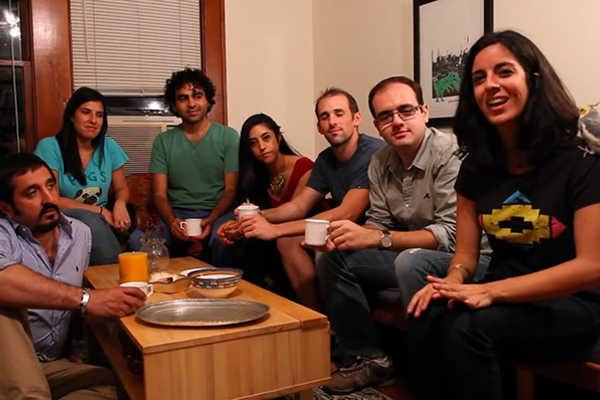 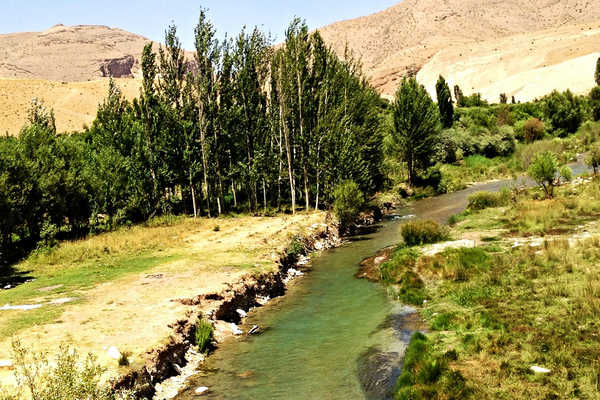 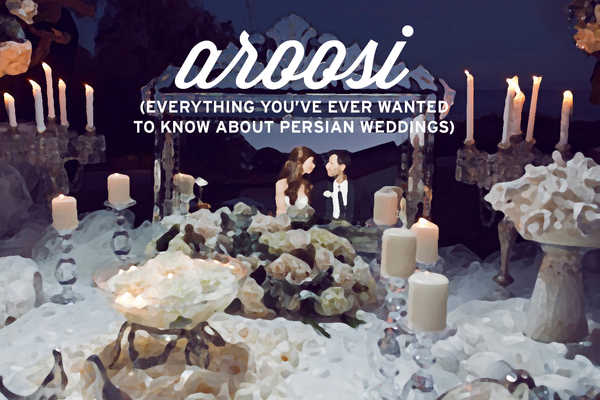 Aroosi: Everything You've Ever Wanted to Know About Persian Weddings